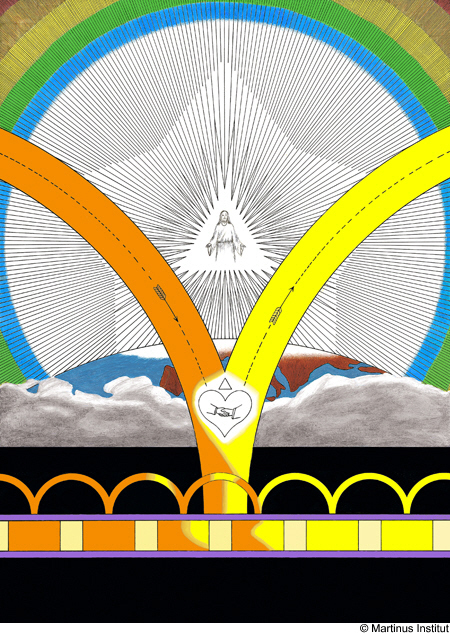 The fully-evolved human being in God’s image after his likeness
Symbol No. 23

Turning the other cheek

In the symbol the two clasped hands show how a loving being responds to darkness and “hostility” (the large orange arc) with friendship. This humane reaction (yellow arc) will later return to the being itself in the form of light and joy.

In The Old Testament it is described how God made known to human beings the aim of creation: “Let us make man in our image after our likeness” (Gen. 1:26). Jesus demonstratet the behaviour of such a finished human being. His words and behaviour have been preserved in the Bible for posterity. The world has been given an example of the aim of creation and evolution.

Christ was able to demonstrate humane behaviour towards his persecutors. While he himself was being crucified he could pray for them with the words: “Father, forgive them, for they know not what they do” (Luke 23:34). These are the actions of the finished human being in the image of the allloving God.

It is this behaviour that will lead mankind out of the darkness (symbolised by the clouds), which is supplanted by the light from God (the radiant triangle) through world redemption (the radiant star surrounding it).

This takes place through a process of evolution from one life to another, (the small orange, circular arcs). The karma which the being has created and is then given back (the circular arcs) gradually gives rise to more and more humaneness (yellow colour). The yellow/orange rectangular fields symbolise the individual terrestrial lives, separated by periods spent in the spiritual world (the light yellow fields).

The steadily increasing awareness and conscience of the human beings on Earth shows that they are on their way to the state of being all-loving. Eventually they will only be able to bear to do good, like the Christ being in the symbol.

Martinus own explanation of the symbol is to be found in his book "The eternal world picture 2" The cosmic symbols of Martinus are copyright protected by Martinus Institut 1981.