The unfinished human kingdom
– Symbol No. 24 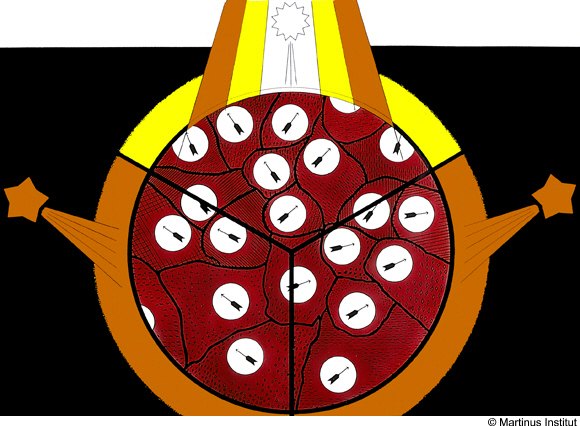 Nations strive after might using both military and economic power. The symbol shows the Earth with its many nations. These are symbolised by the various red fields. These can be seen in a way of organs that have still not learnt how to cooperate ideally in the Earth’s organism. In each field there is a white circle with an arrow which represents the government of the country. The arrows are pointing in different directions.

The orange stars symbolise the materialistic and warlike ideals and actions that dominate the thinking of certain nations. A nation can create war and suffering despite declaring its intentions to have Christian ideals.

The warring parties are thus united in their warlike ideals, which belong to the principle of vengeance, described in the law of Moses as “an eye for an eye and a tooth for a tooth”. In like manner, this principle of vengeance is also adopted internally in the nation’s legal system. Collectively the “killing principle” is symbolised by the orange colour (the energy of gravity). In the upper third of the symbol the arrows are more or less pointing away from these warlike ideals and up towards the rays that, together with the white star, symbolise the truly humane ideals that are already beginning to find expression in the government policies of certain countries. The number, placing or dividing up of the fields should not be interpreted literally or geographically – humane societies are now emerging in more and more places around the globe.