The structure of eternal life
– Symbol No. 36

The transition from one kingdom to another
In the symbol’s step formation we can see the six kingdoms of one spiral cycle delineated by two wide vertical lines. The colour of the field above the steps symbolize the main energy of consciousness in that plane of existence. Red for instinct (plant kingdom), orange for gravity (animal kingdom), yellow for feeling (true human kingdom), green for intelligence (kingdom of wisdom), blue for intuition (the divine world) and light indigo for memory (the kingdom of bliss). 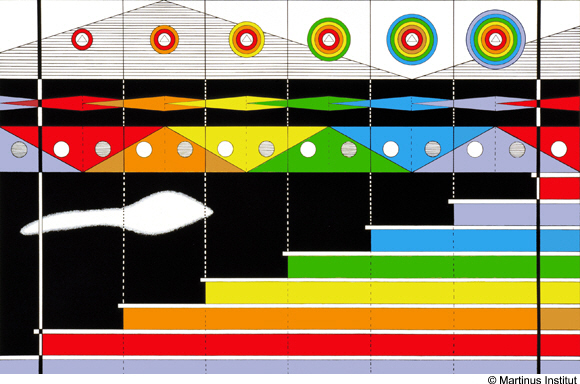 This last kingdom has been given this name because the experiences in this plane of existence are pure light and joy, and they arise by recalling memories from the previous spiral cycle. This kingdom makes its first appearance in the physical world in the form of ice flowers on windows, the formation of suns and the manifestations of the mineral kingdom. The white cloud-shaped figure above the steps indicates that part of the universe that can be sensed using the physical senses that terrestrial human beings have at present, that is to say, the area stretching from the mineral part of the kingdom of bliss to the beginning of the true human kingdom. The spiritual worlds further on can be sensed only through intuition and the faculty of real love.The white and the shaded circles in each kingdom indicate that each kingdom has a primary and a secondary area. After the point of culmination of a plane of existence the beings begin to feel satiated with the traditions of that plane of existence and this leads to the transition to the next kingdom. This transition takes place very gently and unnoticeably, like a branch growing out of the trunk of a tree. There is one exception and that is the transition from the animal kingdom to the true human kingdom; this marks the very turning point from darkness to light symbolised by the large shaded field at the very top of the symbol. This culmination and turning point cannot take place without tears and pain. But only in this kingdom is darkness truly experienced. The triangles in the circles at the top symbolise the living beings – the sons of God – that live through each kingdom. The coloured circles symbolise the ever higher energies of consciousness that the beings acquire as they move towards the culmination of the light.