The spirit of God upon the face of the waters
– Symbol No. 1

The living, thinking universe
The universe is an eternal, living, allencompassing organism that, through religion, we have come to know under the concept of “God”. God’s organism – like our own organism – is enlivened by consciousness. 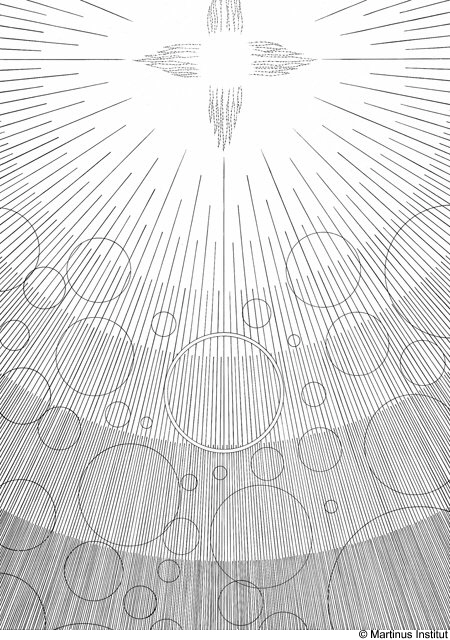 This consciousness – God’s spirit – permeates the universe with its all-encompassing knowledge and almightiness. In the Bible, spirit is symbolised as wind and matter as water. The wind moves the waters. There is consciousness behind all Nature’s creative processes.

In the symbol we see a cross of flames symbolising the eternal Godhead’s perfect manifestation and creation. The sea of radiance symbolises the cosmic world impulses or thought impulses, some darker some lighter in character, through which the all-knowing and almighty God releases and maintains the various states of experience and the various planes of existence for the living beings, each one on its own individual evolutionary step.

Religion, politics, science, architecture, art and other cultural factors that contribute to the creation of society arise out of these world impulses.

The circles symbolise a section of the suns or planets of the universe, whether large or small, and the consciousness of their correspondingly large or small inhabitants. The circles can therefore symbolise “large” macrocosmic societies as well as “small” microcosmic worlds. (They are only “large” or “small” seen from our physical sensory perspective – see symbol 7). The double circle shows our globe and its peoples. (But The symbol can also be seen from a micro- as well as a macrocosmic perspective.) You can see that it is in contact with three world impulses. The one furthest down is disappearing; it symbolises the consciousness and cultural manifestations of primitive human beings. The field in the middle symbolises the old world impulse. It forms the basis of the world religions such as, for example, Christianity, Islam and Buddhism. It has offered spiritual nourishment to people who are at the stage of being believers as well as having nourished all the cultural phenomena of the people during that period. The lighter field at the top of the circle symbolises the new world impulse of which schools, research and materialism are the first signs. Materialistic research will eventually unite with the great truths hidden within the religious mysticism of the world.

The message of neighbourly love is now being made scientific, and on the foundation of this spiritual science the new world culture will be built. A kingdom of peace and love is now about to be born on Earth.