The principle of world redemption
– Symbol No. 2

The spiritual parent-principle
The offspring of human beings and the more highly developed animals are normally lovingly cared for and brought up by their parents until they can look after themselves. A similar care also applies to spiritually immature beings and it influences the way they are guided through their earthly lives from animal to finished human being. Individuals that are ahead of us in evolution function as our teachers until we can look after ourselves. Moses is an example of a firm teacher, whose commandments or laws were intended to curb the worst barbaric anarchy. 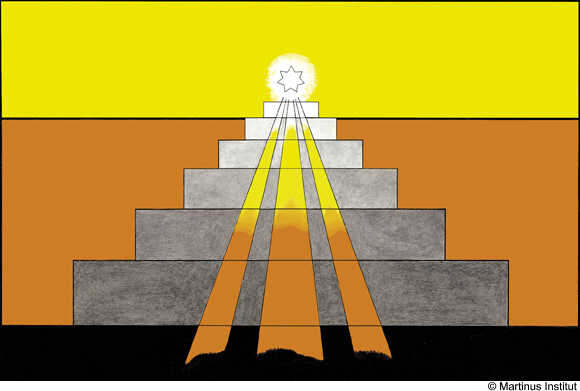 In The Third Testament the highest moral teachers are referred to as “world redeemers”. Jesus is an example of one. The principle of retaliation or the Law of Moses: “an eye for an eye and a tooth for a tooth” has been superseded by Jesus’ opposite attitude: “love thy neighbour”. With The Third Testament the words and deeds of Jesus have received logical interpretations which everyone can check for themselves through experience.

The step figure symbolises humankind’s evolution from animal to human being, and the rays symbolise humankind being led up the series of steps stimulated by the cosmic parent principle (the higher spiritually evolved beings and religions that guide us). The orange field shows the animal kingdom and the yellow field the kingdom of the perfected human being. The two lowest steps symbolise the heathen religions that stimulate the principle of retaliation and the sacrificing of humans and animals. The next step, lit up by yellow rays, symbolises the more humane world religions, Buddhism, Christianity and Islam. The three rays are symbols of the many world religions, not just the three that have been mentioned. The uppermost steps are white, symbolising the fact that the religions of faith is replaced by spiritual science, whose purpose it is to explain the mystery of life to all the people of the Earth.

The white star symbolises the Godhead that, by means of the various religious ideals and ways in which religion is portrayed on the various evolutionary steps, leads living beings onwards and upwards towards the perfect human kingdom.