The perfect human kingdom of the future
– Symbol No. 26


The united states of the world, “one shepherd and one flock”
The countries of the world are being brought steadily closer together. Communication, infrastructure, distribution, economics etc. is developed and adapted to global dimensions.

More and more nations realise that in order to obtain global peace, political stability and wellbeing for all people on Earth, ratifiable, international laws and agreements are needed. 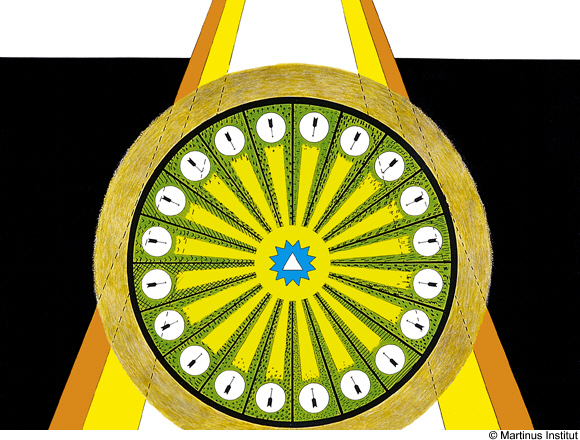 We are becoming more dependent on each other. The dilemma of the great world events is this: should the interest of the nation be at the cost of the world community or should the nation be of service to the whole? Selfishness undermines itself – when seen in a cosmic light. The culmination of darkness leads to consequences that reveal it for what it is in all its aspects. This concerns not least the extensive misuse of money through the “false business principle”, which enables people, perfectly lawfully, to obtain by deception something of greater value in exchange for something of lesser value. World wars and other manifestations of fate make it clear that the happiness or misery of the whole of humankind is the same as our own happiness or misery. The constancy of eternal cosmic laws guides everyone towards unselfishness. The nations will realize that they have no other choice than to co-operate as the world state that has ostensibly already begun to function under the name of the UN. Neighbourly love and internationalism are the solution to the intense crises that are found all over the world. In this way the words in the Bible about one shepherd and one flock are fulfilled – one people with one God and one true religion. This is shown in the symbol by the fact that the Earth has moved completely into the light emanating from the new world impulse – the white colour. The previous ideas about religion (the yellow and orange) will fade away in favour of knowledge of God and thereafter the development of those faculties that make it possible to create in physical matter the kingdom of heaven on Earth. The nations of the Earth (the white circles) and their governments (the arrows) will become regions in the world state, each one with its own distinctive character (the green fields). The yellow sun in the centre symbolises the world government, that initially will be supervised by humankind’s highest representatives in their own special field of competence and responsibility, these people being elected by everyone who is old enough to vote. Eventually this government can be made up of cosmic conscious beings (the blue star). Other factors include:

• Disarmament – the world state will have no outward enemies and will need only a world police force to guarantee internal law and order.

• A judicial system that is able to recognize the difference between criminality and abnormality and will use humane educational methods instead of punishment and sentencing.

• The abolition of money and the private ownership of natural resources.

• The introduction of receipts for having done a certain amount of work to replace money as a means of payment.

• The formation of a fund to pay for the periods of childhood, old age and illness.

• The introduction of machines to carry out the coarse work.

• The development of vegetarianism, art and spirit.

• Whereas previously might ruled over right, it is now right which settles all issues; the world state is therefore guided by intellectualised feeling and humanised intelligence, which is the same as neighbourly love.