The materialistic or incomplete world picture
– Symbol No. 22A

A lifeless universe
When the ability of believing degenerates the sons of God goes through a phase of godlessness and materialism. It has no knowledge of the living God behind the universe, and life can be experienced as an inferno of pure chance or the interplay of blind forces. 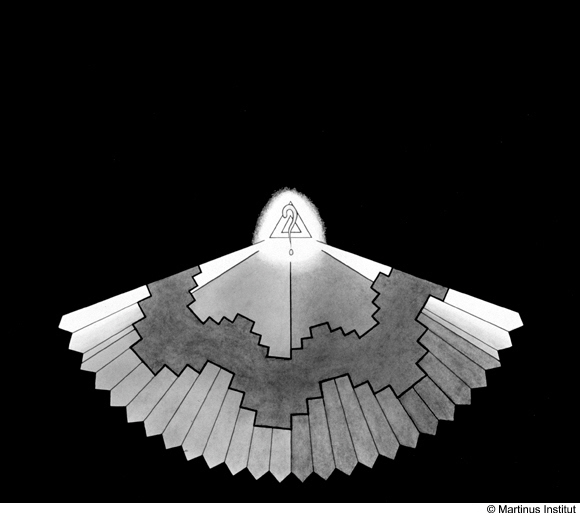 Materialistic people can of course be extremely humane and loving. They can be greater practical worshippers of God than many beings who are able to believe, due to the fact that God reveals himself through the neighbour. Atheism, however, also leads to the culmination of the culture of death. Research into ingenious murder weapons and methods of killing both humans and animals can be called neither “animal” nor “human”; it can best be described as “devil consciousness”. The beings do not know that in reality one absolutely cannot kill one’s enemies.

In the symbol we can see a part of Symbol 22. Above the jagged dark field is once again symbolised the son of God’s physical organism. The numerous rectangular rays below symbolise the many living beings that this son of God is confronted with on the material plane, whether in micro-, meso- or macrocosmos. This being knows nothing other than time and space, with the result that the existence of God and the “I” is an insoluble mystery to this being (the triangle in the I of both God and the son of God is placed behind a question mark). The triangle also symbolises the eternal, triune unification of the I, spirit and matter – X1, X2 and X3. The structure of prayer and the eternal, cosmic connection between God and the son of God, as well as knowledge of the spiritual world surrounding the being is also hidden from this being.

Through materialistic science the beings gain knowledge of the physical universe, thereby enabling them to subdue the Earth through the use of machines and tools. It lifts human beings out of material ignorance, but it cannot lead them out of the darkness. It is not able to create a sense of morality or offer cosmic guidance for one’s behaviour and way of being. The only thing that can do that is a science of the spiritual causes behind physical reality. In the perfect human kingdom physical science will be guided by the science of neighbourly love and thereby arrive at the fulfilment of its true mission: that the curse that followed Adam out of the garden of Paradise, “ in the sweat of thy face shalt thou eat bread”, be fully removed.