The karma of humankind
– Symbol No. 25


The world is transformed into one kingdom
Every living being’s fate is built up of its own actions that move through a cycle and return to the living being where they originated. This also applies to the actions of nations towards other nations and their citizens. These actions create collective karma that can be released on those of the nation’s inhabitants who share this kind of fate. 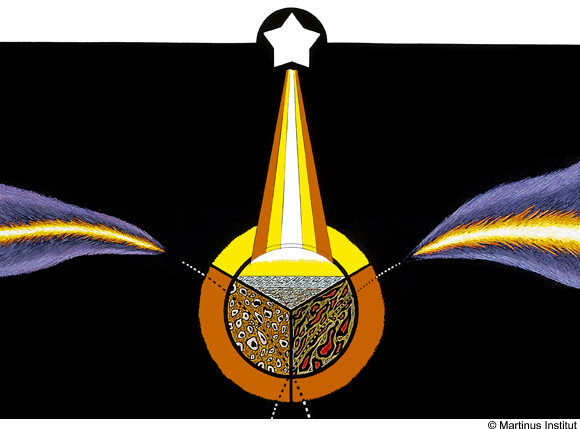 The animal tendencies are symbolised by the thick orange crust. This “sphere” attracts like a magnet dark karma (the flames), which is released when the conditions are right.

The five-pointed star symbolises the principle of world redemption that guides terrestrial human beings unscathed through this “initiation into darkness”. We can see how this guidance includes the religions and ideals that promote revenge (the orange colour) as well as the humane world religions (the yellow colour). All forms of war are “a worshipping of heathen gods”, regardless of the extent to which the beings have been baptised or confirmed or think of themselves as “Christians”. But when one has had a personal experience of being affected by war, one’s longing for peace and happiness grows, along with one’s receptiveness for the science of real, true love. It is our actions, and not our allegiance to religious traditions, that determine how humane we are. Only when the being can act in a humane way in all the situations of everyday life, is it actually, deep down, truly "Christian" and loving of its neighbour.

True neighbourly love is symbolised by the white field at the top of the circle. The yellow field under it symbolises the effect on humankind of the humane world religions. The light blue field symbolises the humane advantages that have already been created on Earth, such as, humane religions, worship, art, literature, technology and science, and their resultant advantages.

The dark karma of suffering has a different quality. The field on the left is about its consequences in the form of sudden “death”, which, owing to the fact that no being can die, causes less suffering, despite everything, than the effects of life-long sufferings, illness, torture and other mutilation, all of which are symbolised in the field on the right. Dark fate is the result of terrestrial human beings’ treatment of animals, human beings and nations (also in micro-cosmos).For instance through meat eating (see symbol 38). Suffering will lead people from the theory of neighbourly love (A-stage), through practice as a result of the inspiration given by the good example of other beings (B-stage), to the automatic ability of the being who is a genius in manifesting neighbourly love (C-stage).