The fate arcs of the living being
– Symbol No. 18

The eternal now
When on Good Friday the disciple, Peter, intervened to defend the world redeemer, Jesus stopped him with the words: “Put up again thy sword into his place: for all they that take the sword shall perish with the sword” (Mat. 26:52). 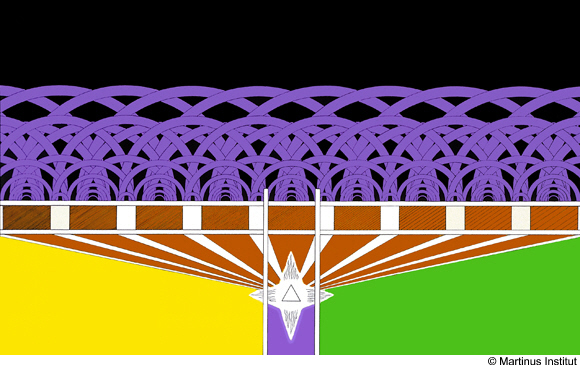 Jesus knew about the law of karma: “what you sow, you will reap”. He demonstrated the same insight and caring consideration when on the cross he prayed for his executioners with the words: “Father, forgive them for they know not what they do”. Without knowing, the people who crucified Jesus were with their actions preparing their own forthcoming crucifixion or a comparable form of suffering. Jesus wanted to spare them this. He forgave them and would not avenge himself.

Sowing, reaping and the formation of fate are Nature’s own way of educating and explaining the term: “eating of the tree of knowledge”. This is the road that leads terrestrial human beings to “having their eyes opened”, enabling them to differentiate, like God, between good and evil, seeing what creates happiness and what creates unhappiness. At some point one will reach the stage of only being able to act logically and lovingly and “to eat of the fruits of the tree of life”.

The terms, “Hell” and “Satan”, are therefore more expressions of the state of suffering that the imperfect beings expose hemselves to on this Earth, they do not express damnation in an eternal, non-physical Hell-fire beyond earthly existence. Existence in thespiritual world between two incarnations is, on the other hand, a period of rest in Paradise, free from unpleasant karma – apart from one phase where one has to let go of the dark thought climates that one has cultivated in the earthly life that has just elapsed. Anyone who, for example, tried to escape a suffering state by committing suicide will be badly disappointed, as the suicide simply continues in a spiritually dark and gloomy state until the suicide is liberated from his dark thoughts. In the symbol we can see a series of orange rectangles that become lighter and lighter towards the right. These symbolise the series of physical lives that a being lives through in the course of its reincarnations. In the middle we see the being symbolised with a triangle and a star-shaped cross, and its present physical incarnation is shown between the two vertical white beams.

The orange rays show the being’s connection with its previous and future earthly lives, the white rays show the connection with the spiritual periods in between. The white areas express the light, beautiful states between the earthly lives. The yellow area represents the being’s past and the green its future. The violet arcs up above show how the earthly lives are linked by cause and effect, so that the way a being has lived in previous incarnations is the cause of its fate in later lives. We therefore live today very much in relation to previous and future lives.