The eternal world plan
– Symbol No. 13


God’s eternal method and technique of creation
This symbol goes more deeply into the explanations from symbol 11. Again we can see the eternal cycle and how the contrast between light and darkness is created through the 6 different planes of existence in the universe. “The principle of contrast” is the eternal basic law of experience of life. An experience is something created. This takes place through “something” appearing in relation to something else. The eternal world plan is God’s method of maintaining an eternally renewed youthfulness in the eternal consciousness of both God and the sons of God. 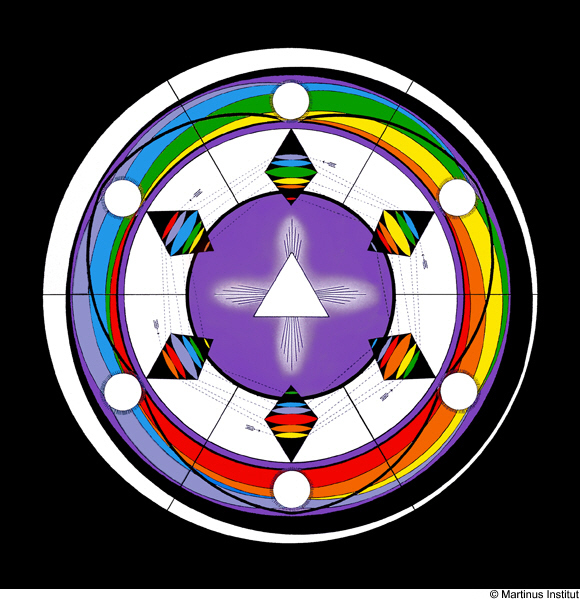 The white triangle in the centre once again symbolises the eternal nameless “something” – God’s “I” – X1. The violet field in the centre symbolises God’s ability to create and experience – X2. The radiant cross in this field signifies the total perfection of the divine world plan.

If we look at the animal kingdom with the energy of gravity (orange) culminating, the “entire body” of this kingdom is made up also of intelligence (green) increasing, feeling (yellow) increasing, instinct (red) declining, memory (light indigo) declining and the body of intuition (blue), which is latent.

The dotted lines show how these basic energies change from kingdom to kingdom. A long series of transitional stages form the connection between the 6 states that are shown in the symbol: one culminating, two declining, one latent, and two increasing, which brings us to a new state, culminating in a higher spiral cycle (see symbol 14). The changing relationships between the basic energies is the cause of the different abilities to experience and create on each plane of existence. The basic energy that is culminating defines the plane of existence.

The red colour for the energy of instinct symbolises the plant kingdom. Here the energy of instinct culminates. The faculty of instinct promotes automatically the outward vital functions of the plant. The fact that instinct functions with such brilliance is due to previous spiritual planes of existence where the being consciously trained abilities and knowledge, which gradually turned into unconscious, automatic functioning. The instinct being lives in an inner spiritual state. A flower is thus an outward sign of this inner state of bliss. The many physical effects that plant beings are subjected to, lead them on towards day consciousness in the outer material world. Once the beings can experience consciously on the physical plane, we call them “animals”.

The orange colour for the energy of gravity, which is culminating, characterises the animal kingdom. Here the beings experience more and more an individual organism, cut off from the rest of the world, with their own free will. Through separate male and female beings – and the ensuing struggle for a mate, offspring, food and shelter – they experience the zone of the culmination of darkness. In the animal kingdom suffering, which the being creates through its own actions, is experienced day-consciously thereby causing the humane faculty to grow. In time the being will become a “true human being” and through its faculty of intuition will gain cosmic consciousness, which will enable it to experience personally that it is one with God’s consciousness.

The yellow colour for the energy of feeling, which is culminating, symbolises the true human kingdom. As a result of sufferings and a certain degree of intellect the being has reached the stage where it is able to love all and everything. Defence and all use of force are things of the past in this plane of existence. The Earth and terrestrial human beings are now rapidly on their way towards this completely finished human kingdom. The people of the Earth will be united as one people and one nation. The value of money will be replaced
by the value of the ability to work. Poverty and suffering will have ceased and everyday life will be characterised by the creation of humanity (see symbol 26).

The green colour for the energy of intelligence, which is culminating, symbolises the kingdom of wisdom. All the creative processes in the universe originate in this plane of existence, e.g. the living beings’ physical organisms. In the spiritual worlds creation takes place in the form of thought matter and through thought pictures these ideas can be transferred to engineers, technicians, chemists and other receptive individuals on the physical plane. In the same way the experience of these physical beings is transferred to the physical plane. This is how the lower kingdoms of the universe are built up and maintained. Behind everything created lie spiritual causes.

The blue colour for the energy of intuition symbolises the divine world. This is life’s highest sphere of consciousness where all ideas for creation and manifestation originate before being worked on in the kingdom of wisdom.

The light indigo colour for the energy of memory symbolises the kingdom of bliss, the last one in the cycle. Here the being moves into an inner solitary world of bliss made up of the memories accumulated throughout the cycle that has elapsed. It experiences itself as the Godhead in its own inner universe, and only after aeons of time does it begin to be satiated by this state and it begins to long for a new physical experience of life that is to come in the physical sphere of a higher spiral. Fire, electricity and the formation of suns in space are the outward signs of this transition, which will eventually take the form of what we know as the “mineral kingdom”.

This eternal alternation between involution into matter and evolution out of it again is symbolised by the black and white cycle on the outer rim. Only in the animal kingdom is darkness realistically experienced. The purpose of this eternal cycle between light and darkness is to maintain God’s consciousness. In this way the cosmic consciousness of God and the sons of God is recreated, maintained and renewed.