The eternal Godhead and the beings’ sensory abilities
– Symbol No. 30

What is needed in order to “see God”
The combined sensory abilities of all living beings constitute the Godhead’s sensory ability. Any meeting with our neighbour, that is everything that we come into contact with, is a meeting with God. Through this interaction the various planes of existence are maintained. 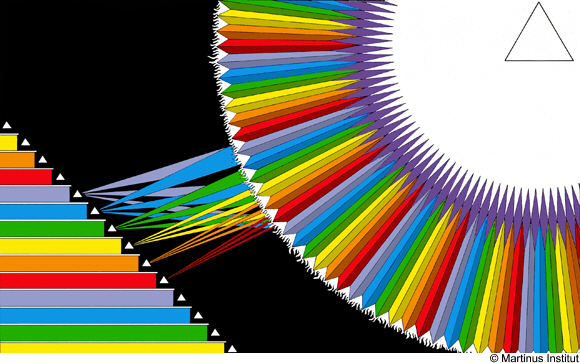 This comes about through the mother energy, which regulates the changing sphere of activity of the six basic energies. The white figure symbolises the I of the Godhead that consists of the combined I’s of all living beings. The violet figure symbolises the living beings’ X2 or creative abilities that together make up the Godhead’s X2. Radiating from these figures are the coloured fields that symbolise the living beings’ X3. All together these organisms constitute the Godhead’s X3. The created part or the universe is therefore the visible body of the Godhead. From this perspective the irrational belief in “the devil” is shown to be a derailed view of God. Everything that we sense is God, and the Godhead senses through us.

The staircase figure on the left of the symbol symbolises the ladder of evolution. Each step is one plane of existence. The small triangles symbolise the I’s in the living beings on these planes of existence. The groups of rays that emit from these beings show which basic energy is prevalent in that particular plane of existence. These energies determine how the being creates and which opportunities it has of experiencing in relationship to the surrounding universe.

The senses are those realities through which the interaction between the living being’s energy and the energy of its surroundings can come about. The most predominant sensory abilities of the various beings is shown in the symbol by the fields struck by the rays.

Red (the instinct being) is able at most to have a vague inkling of pleasure and displeasure but is unable to analyse it.

Orange (the gravity being) can experience and manifest by virtue of the energy of gravity, primitive feeling and the beginnings of intelligence.

Yellow (the finished human being) has feeling combined with a high degree of the energy of intelligence, which means that the energies of feeling and gravity can only manifest absolutely logically, that is to say in a way that is all-loving. This state of consciousness opens, through the faculty of intuition, the way for cosmic consciousness.

Green (the wisdom being) is characterised by culminating intelligence over and above the previously mentioned basic energies.

Blue (the intuition being in the divine world) has this highest energy of consciousness culminating. In reality, however, these two highest kingdoms should be understood as one kingdom with two sections for high cosmic beings. We can see how intuition stretches over the whole spiral cycle – as life’s very highest and all-permeating sensory energy.

After this culmination of life experience we come to light indigo (the bliss being); such a being lives in its own inner world. This being’s faculty of memory enables it to sense copies of previous experiences of being together with beings in its surroundings throughout the whole of the spiral cycle. These copies of memories in time shine like gold and confirm the old saying: “time heals all wounds”. The kingdom of bliss consists of an inner experience of these “gold copies”. The being can at will move backwards and forwards in this inner universe, which (as can be seen) stretches over all the kingdoms of the spiral cycle, not, however, as a sensing in the outer world but as an inner re-experiencing of this world. The bliss being also has a strong intuition that now acts inwardly and makes it a Godhead in this universe of previous experiences. It sees the “answers” or the “conclusions” behind all the previously experienced details, regardless of whether they were once experienced as light or darkness. It experiences in the same way as God: “all is very good”. Each of the kingdoms of consciousness is fully described in symbol 31.