The eternal, cosmic, organic connection between
God and the son of God I
– Symbol No. 21

The development, significance and function of prayer
The animal’s cry of anguish at the moment of its death is an automatic prayer for help. There must be spiritual receivers, and therefore there must be a meaning, behind such a prayer or instinctive, automatic function. There were also receivers of Jesus’ words from the cross: “Father, forgive them for they know not what they do”.

The animal’s automatic prayer concerns its own rescue whereas Jesus’ conscious prayer is about forgiving his executioners and persecutors, and is addressed directly to God. High-psychic powers – white magic – lie hidden in the conscious, unselfish prayer.

The symbol on the right is the whole universe, i.e. God. Every living being finds itself in the centre of this organism, and is always unshakeably and organically connected to God. The white circle in the centre symbolises the I, X1 (See symbol 8, 9 and 10). Round it can be seen the mother energy with the violet colour and the eternal part of the bodies of the basic energies, X2. Round these can be seen the son of God’s created eternity body, X3. The oblong coloured fields on the outside are the body of the Godhead (the created part of the universe) that the son of God relates to. The pointed ends of these figures represent the eternal part of the basic energies of the universe.

The violet field on the outside symbolises the mother energy of the universe and the white disk behind it, the I of the Godhead.

The four uppermost drawings on the left symbolise the evolution of the relationship to God.

• The first is the state of primitive human beings, with their worship of many gods and the blood sacrifices made to them.

• Next comes monotheism, i.e. the worship of one god through the humane religions.

• The third drawing illustrates the atheistic or godless state. These are people whose intelligence and sense of justice prevents them from believing in the dogma of the eternal flames of Hell awaiting those who have not been baptised, confirmed or who are born out of wedlock. They are unable to believe in the explanation of an all-loving and almighty God who sacrificed his innocent son in order that murderers could go freely to Paradise. 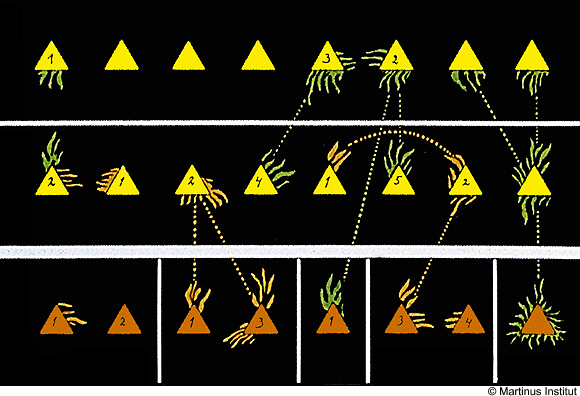 The small orange triangles at the bottom on the left represent beings that are gaining help or inspiration from spiritual beings, represented by the yellow triangles in the rows above.

In the first small section of the lowest row, the being shown as the orange triangle marked 1 asks the being marked 2 for something, but receives no help, as this being is either unable or unwilling to help. In the next small section of the lowest row one can see being 1 (orange triangle) praying to God. All prayers – even the slightest sigh – are picked up by God through the guardian angels (yellow triangles), which in this case stimulate being 3 to help being 1. This often takes place completely without any of the physical beings, symbolised in the lowest row, knowing what is happening.

It should be added that Prayers addressed directly to God: “Our Father, which art in Heaven” leaves no doubt about who is being addressed.

In the next small section one can see the process by which intellectual human beings, e.g. artists or scientists – often without knowing how – can gain inspiration or flashes of intuition.

In the next section one can see the connection made with spiritual beings through a medium, which can be dangerous for human beings that have not been initiated in this field. Without the knowledge of how to protect oneself properly there is in such a process a great danger of being possessed. In certain situations, however, the connection to the spiritual world through a medium can be justified. The last section illustrates the cosmic conscious being’s connection with Providence. Even though it is not able to see these beings with its physical eyes, it is in no way alone in its mission on the physical plane. (See the next symbol).

cosmic symbols of Martinus are copyright protected by The Institute of Martinus Spiritual Science, Copenhagen, Denmark. All rights reserved.