The cosmic radiance of the Earth
– Symbol No. 27


The days and nights of eternal life
In the cosmic 24 hour period of night and day, which extends over aeons of time, the spaceship Earth with its passengers has only just passed the culmination of mental darkness and cold. We have for example had two world wars within one century and there will be more to come. So in the same way that the winter is coldest after the solstice, the Earth is now still characterised by a mental form of the coldness of winter at its culmination. But after the night comes the day and the light is now rapidly increasing. The globe being, which is the living macro-I of all the living beings of the Earth, governs and supports all manifestation of life on the globe. The increasingly bright thought climate of the Earth (the increasingly bright aura) means that, among other things, beasts of prey, venomous snakes, and certain dangerous insects will gradually disappear from the Earth, just as the dinosaurs and other reptiles at some point had to seek out planets with possibilities of evolution that were more favourable to them. 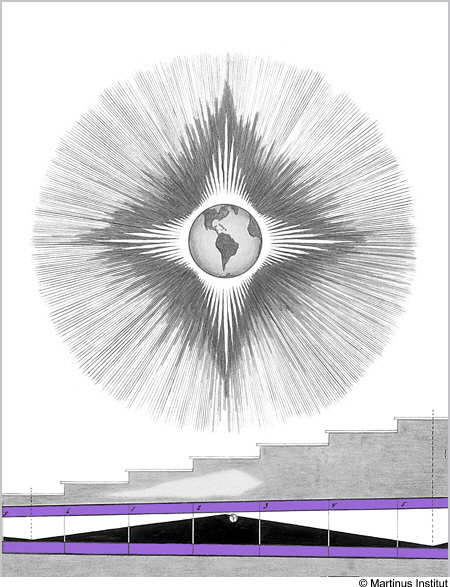 Primitive human beings will relatively rapidly be able to evolve into civilised human beings thanks to the present-day, modern society of information and communication, which is able to disseminate many different kinds of knowledge. The lowest figure in the symbol shows a cosmic cycle of day and night, with the culmination of darkness alternating with the culmination of light. The width of the field is increasing which means that the experience of life is eternally growing and being renewed.

From the time of the completion of Jesus’ mission it was no longer possible for dark forces to gain permanent acceptance by the Earth globe being. The bright radiation from the aura (“the cosmic radiance”, which can only be seen with cosmic sight) is increasing, with the result that the conditions necessary for the manifestation of justice, compassion, forgiveness and love on Earth are strengthened.

The step formation at the bottom symbolises the six planes of existence that are repeated in each spiral cycle.

The white cloud shape that reaches from field No. 6 (the kingdom of bliss) right up to the border of field No. 3 (the true human kingdom) marks the limits of the consciousness of unfinished terrestrial humankind. The cloud shape symbolises that terrestrial human beings only know about the physical aspects of the mineral, plant and animal kingdoms. The small representation of the Earth at the bottom is placed in the animal kingdom after the culmination of darkness. The Earth together with its human beings is now moving towards peace and love.