The cosmic cycle of the pole principle
– Symbol No. 35

The magic wand in the fairy tale of eternal life
Our consciousness, just like our physical organism, belongs to the area of the created (X3). Everything that is created is changed and renewed eternally. The primal force behind the renewal of the eternal experience of life is the pole-transformation (see also symbol 33). In the symbol here we can see two horizontal fields each made up of a yellow and a green field. The yellow field symbolises the feminine pole, and the green one the masculine pole. 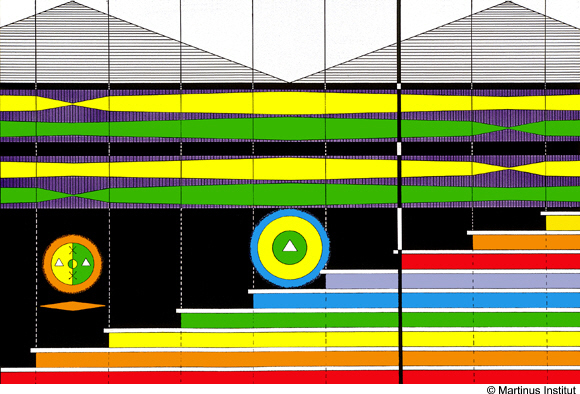 At the same time that these beings are culminating as male and female beings in the animal kingdom, darkness is also at its culmination. But their unloving actions return as pain and suffering and thereby teach the being what is “evil” and what is “good” (see symbol 18 and 20). So through “eating of the fruits of the tree of knowledge” the beings would by time reach the stage of being like God – one with the Father – and know the difference between good and evil.

All evolution of consciousness in terrestrial human beings is due to the growth of the opposite pole. This affords access to universal love, art and science – at the expense of marital love. When the poles come into balance once again we are no longer male or female but finished human beings in God’s image after his likeness (see symbol 23).

The entire pole transformation is regulated by the “mother kernel” in the being’s super consciousness and determines the being’s experience of pleasure and displeasure.

The green and yellow horizontal fields show that the sexual cycle stretches over two cosmic spiral cycles. The roles change and the living being that is a female in the present animal kingdom (the orange step) becomes a male in next spiral cycle’s animal kingdom. (The steps at the bottom symbolise the kingdoms as explained in symbol 13). The orange circle above the animal kingdom (the orange step) with the two crosses in it symbolises that two beings are in love and engaging in the act of copulation. The one-poled, hormonebased state of being in love belongs to the animal kingdom; in the other kingdoms the poles are in balance.

The perfect, finished human beings have universal love as the foundation of their lives in all situations. The unconscious experience of Gods spirit by glimpses in the animal kingdom (see symbol 34) has now become a permanent conscious state. Jesus said: “In the resurrection they neither marry, nor are given in marriage” and he taught this way of being all-loving. This Christ-consciousness is indicated by the blue circle. Here light is at its culmination (shown at the very top).