The categories of the consciousness of terrestrial human beings
– Symbol No. 39 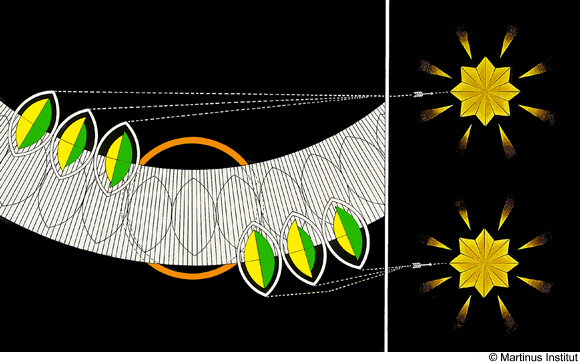 Terrestrial human beings have different spiritual ages, which causes them to be on different evolutionary steps. Some are content with their faith and relate more or less to the old world impulse and its traditions. Others are more receptive to the various manifestations of the new world impulse (see symbol 1). Receptiveness is not a question of will – it depends on the experiences the individuel has lived through in the past. This is the deciding factor in the exercising of its will, its partiality and its impartiality towards the old or the new impulse. This reveals how unreasonable it is to be intolerant of and to bear ill-will towards beings that are different.

In the symbol the two groups are further illustrated by the 6 oval figures that symbolise the various categories of terrestrial human beings according to the different balances between intelligence (green) and feeling (yellow). The following three categories are found within both of the main groups: beings with a balance between feeling and intelligence, beings with a predominance of feeling and beings with a predominance of intelligence. These, in all, 6 categories are in “Livets Bog” divided into further sections according to how well-developed their intelligence and humane feeling is. What follows is a very brief description of the 6 categories (the coloured, oval figures – described from left to right).

Group A – Beings for whom the religious aspect of their lives can only be furthered through the new world impulse:

1. Beings with a balance of feeling and intelligence. The forecourt of the great birth. The most advanced and spiritually developed terrestrial human beings that have come through most of their karmic suffering and have a well-developed sense of logic.

2. Beings with a predominance of feeling. From true spiritual researchers, artists and reformers to sectarian fanatics. From a slightly weak to an extremely weak sense of logic.

3. Beings with a predominance of intelligence, such as spiritual researchers, politicians, scientists and business people. From a slightly weak to an extremely weak faculty for empathy.

Group B – Beings who are mainly influenced by the old world impulse:

4. Beings with a balance of feeling and intelligence. The true believers in the old world impulse, who are the source of inspiration behind the creation of much of the humaneness in the world.

5. Here the predominance of feeling is given expression in, among other things, holy wrath, inquisition and fanaticism.

6. A predominance of intelligence and primitive feeling. Beings without much conscience. The ”youngest” within civilization.