The act of copulation or the spirit of God in the darkness
– Symbol No. 34


“How can a man be born when he is old?”
The spirit of God pervades all life in the form of the highest fire. This is the organic power that promotes lust for life in the living being’s physical and psychic organisms. This force is distributed in such a way that each spiral cycle is divided into a light and a dark area. In the dark area (the animal kingdom) God’s shining spirit can be experienced only in glimpses and unconsciously through the sexual organs in the act of copulation. This artificial act of love in the animal kingdom, which is not unselfish, makes it possible for disincarnated beings in the spiritual world to attach themselves to two physical guardian angels (a mother and a father) and incarnate in the midst of the deadly zone of the animal kingdom. 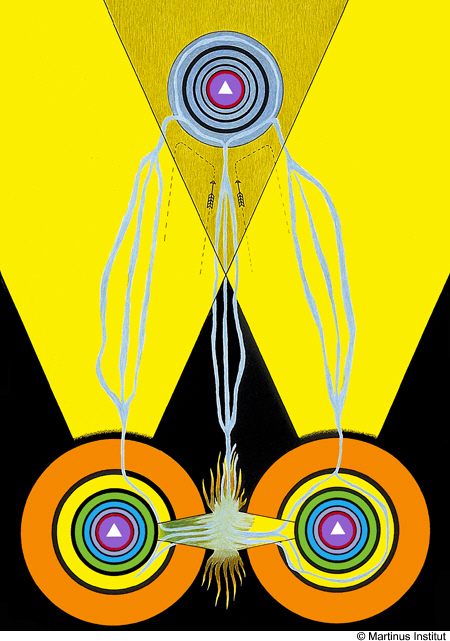 The triangle at the top symbolises a being visiting the kingdom of bliss between two terrestrial lives. It is ready to incarnate again into physical matter. The red circle symbolises the energy of instinct that together with the fertilised egg automatically leads the process towards the formation of an embryo. The embryonic stage, the birth, childhood and youth constitute a repetition of previously experienced existences. On reaching adulthood the new organism is a completed tool for the living being itself, dependent, for better or worse, on the good and bad habits and experiences of previous lives. At the age of 30 the being is from a mental point of view ”fully born” into this incarnation. The two white triangles at the bottom symbolise the I’s of the father and the mother. The two orange circles and the yellow rays coming from them symbolise the fact that they are engaging in the act of copulation. The male being on the left and the female being on the right are shown with an enlarged feeling (yellow circle) because of the state of being in love. (The remaining circles symbolise the other basic energies.)

The act of copulation releases the same spiritual sense of intoxication as that which the discarnate beings finds itself in. This state of bliss (indigo colour) thus constitutes the ”bridge between” the physical and the spiritual planes of existence that makes reincarnation a possibility.