Human beings and animal and vegetable food
– Symbol No. 38

Very little attention has been given to this guidance given in the Bible (Gen. 1:29). For many people it is a tradition to eat animal food. For beasts of prey it is natural, but for civilised human beings who have left behind the more primitive and robust evolutionary stages of the animal it is unnatural. It is a great strain on the modern, refined and civilised human body to take in the same food as the beast of prey, and the cost is organic illness in the body. 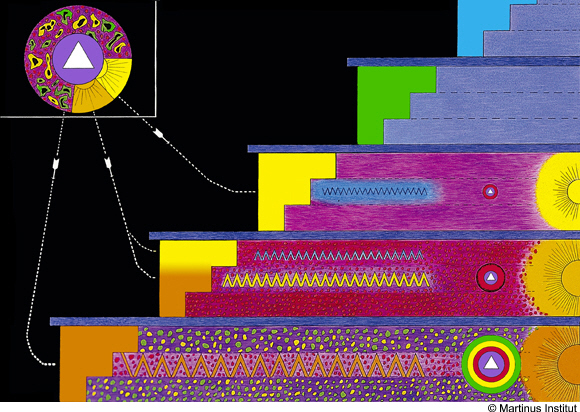 Our eating habits are also to do with respecting the right to life of animals. Animals are confined, tortured and killed, but the sixth commandment: “Thou shalt not kill” and the law of fate: “You reap as you sow” also apply in our relationship to animals. From a cosmic point of view, our persecution of animals creates a constant risk of death, accidents, lack of freedom and other outer difficulties. We are protected only to the degree that we protect other living beings. To consume other living beings’ organisms, muscles, livers, kidneys, hearts and intestines is a tradition that is dying out.

It should be added that developed human beings will similarly also give up the traditions of consuming alcohol, tobacco, narcotics and other substances that are poisonous to the spirit and the body’s living microbeings. In this respect terrestrial human beings are still a long way from loving God and their neighbour as themselves.

The ideal food for terrestrial human beings’ present evolutionary step consists of vegetables and fruit – possibly supplemented with dairy products at the beginning. Later on only the ripe fruit flesh surrounding the seed will be considered the right kind of food. In this individual process each person should adopt that particular diet that causes them no trouble and which they find easy to digest.

The lowest step of the staircase symbolises the pure form of the animal kingdom and the food of the beast of prey or carnivore. The zigzag line shows the coarse vibration from the living microbeings in the microworld of meat. In the process of digestion the killing of these living “meat life-units” in microcosmos (the circle with the triangle in the middle and, on this lowest step, the yellow and green circles) releases the real nourishment (the red particles). Apart from the karma as a result of the killing, this animal process also brings about a loss of energy for the organism.

The uppermost steps symbolise the completely spiritual kingdoms where food is mental and consists of thoughts and actions that create light and joy. The circle at the top on the left symbolise an unfinished terrestrial human being and the way it relates to the various groups of foods.