The origin of species
In symbol 28 we saw the living beings’ ladder of life from the side. Here we see this step construction from the front.

Throughout the spiral, various “species” are travelling up this ladder of life. Each “species” is characterised by the various physical, astronomic or microcosmic conditions that it has passed through in its evolution. Some species are related, which means they have passed the same “planets” in their cosmic journey. These “cosmic paths” are thus the real factor behind the “origin of the species”. 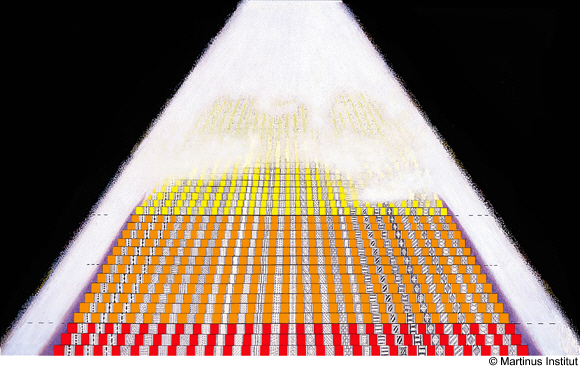 Path No. 5 from the right symbolises our own path (that of mammals) and terrestrial human beings’ crossshaped organisms. Path No. 6 from the right symbolises the path of birds and path No. 4 from the right that of insects. Some of the beings from this path have attained to social conditions that are more advanced than the societies of certain primitive terrestrial human beings. The term “human being” describes an all-loving, humane state that applies to all living beings on a certain evolutionary step regardless of which spiral cycle it is in. All “species” are thus on their way to becoming finished human beings in God’s image after his likeness.

In the pyramid the red steps symbolise the kingdom of instinct or the plant kingdom, the orange steps the kingdom of gravity or the animal kingdom and the yellow steps the true human kingdom. At this point the beings are able to materialise themselves freely and to create their organism and external appearance according to their wishes. The outer differences have been ironed out and the beings can communicate to, understand and love one another. The lowest dotted line at the sides of the pyramid shows the transition from the plant to the animal kingdom. Insectivorous plants are examples of this transitional state. The shorter dotted line shows the transition between the true animal kingdom and unfinished humankind. The upper dotted line shows the transition into the kingdom of the finished human being. The white cloud symbolises the living beings’ X1. The faintly indicated violet colour symbolises the beings’ X2. These colours symbolise that the living beings’ X1 and X2 together form the Godhead’s X1 and X2. And in the same way, the coloured areas symbolise (a part of) the organism of the Godhead or the universe.