The animal state, with its rivalry and struggle to obtain the favours of the partner – is the background to all forms of darkness. In this zone darkness culminates. But the greater the degree of darkness, the quicker the being becomes satiated with the traditions of the animal kingdom, and this expulsion from the animal paradise continues right up to the point where the human being is perfectly humane or loving towards its neighbour. 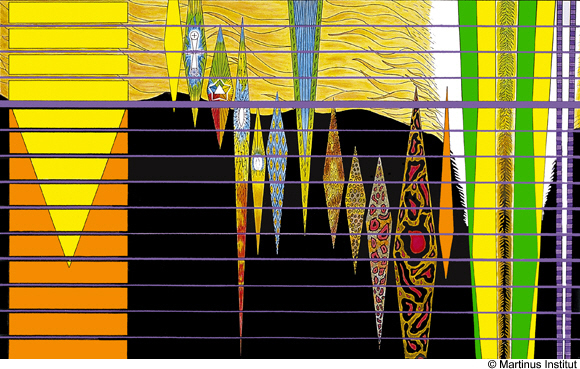 This transformation of the consciousness takes place through many reincarnations (the steps on the violet ladder-shaped figure to the right). The orange and yellow steps to the very left of the symbol symbolise various stages. The pure animal stages at the very bottom, above that the transformation from the animal to the human being and the true human stages at the top (see the same yellow wedge in symbol 36). It is symbolised that the human consciousnes is born in the animal kingdom as a result of suffering and what Martinus calls ”the pole transformation” which is described here and in symbol 35. All living beings have a “masculine pole” and a “feminine pole”. In the animal kingdom the being to appear as either a male or a female being while the finished all-loving human being is without gender. The shifting of the balance between the poles is called the pole transformation.

The symbol is explained starting from the right. By its side can be seen a vertical figure with a green stripe (the masculine pole) and a yellow stripe (the feminine pole). Where the feminine pole (yellow) is latent we are dealing with a purely male being. After this culmination the feminine pole develops to an equal balance with the masculine pole. What was previously an “animal” is now a “human being” without gender. This state of being a true human being is symbolised above the thick horizontal violet strip.

Next to this figure there is a yellow/green figure which represents the transformation of the female being of the animal kingdom. Here it is the development of the masculine pole (green) that makes the “animal” into a “human being”.

This new state is an inner ability of sympathy, that grows organically in the individual until it include all individuals irrespective of gender. In the perfect finished human kingdom (above the yellow-green horizontal line) the all-loving humans does not appear in masculine or feminine organisms.

“Friendship” is an example of the beginnings of neighbourly love that gloves between people. This warmth will grow to include sympathy for one’s own gender. There is hardly anything that has been so persecuted and misunderstood through the ages as homosexuality.

This increasing ability to feel sympathy also has to be cultivated to the point of neighbourly love. In the beginning it is easily confused – in not so fortunate ways – with the moral of marriage. The many unhappy marriages, the many deserted partners and children and other painful sexual states of today do not express moral genius.

But creation continues and when the new ability to feel sympathy has reached its finished state it can only bring joy and blessing to the being itself and its neighbour – irrespective of gender. Then the being is protected from suffering and loosing its way – also in the sexual matters. Only happiness and blessing follow in the trail of the all-loving godlike human being.

The birth of the human consciousness - the evolution from animal to human being – is symbolised by the 12 vertical figures. We can follow the initial stage, the culmination and the degeneration of these thought climates and see how they connect with each other.

From the right, the figures symbolise the following:

1. The terrestrial human organism. From an ape-like, coarse, physical body the organism is transformed into an increasingly refined human external appearance.

2. The killing principle. From sacrifices and killing, to war and meat-eating.

3. Ways of thinking that kill, such as the struggle to procure food and a mate, hatred and jealousy.

4. Arrogance, ambition, boastfulness, megalomania and other forms of self-conceit – also in spiritual areas.

6. Neighbourly love beginning with the humane religions and ending with pure spiritual science.

7. Art in the animal kingdom. The celebration of hunting, fertility and war-like ideals and later the worship of marriage, heroes and religions based on belief. There then follows a degeneration in the form of the transition into the art of living (universal love).

8. The religious principle. The lighter the yellow, the more it is characterised by the pursuit of genuine humanity. The light that guides us.

9. Psychic sensory abilities. Clairvoyant abilities etc. develop out of the highly sensitised ability to sense what is about to happen that is found among animals. Black magic etc. also comes into this category. In the West these abilities were primarily blocked out by the inquisition. We can learn to differentiate between low- and high-psychic abilities. The correct use of prayer is a high-psychic power – white magic (see symbol 22).

10. The great birth. With cosmic consciousness terrestrial human beings become conscious of the universe and all its kingdoms, symbolised by the colours surrounding the fivepointed star.

11. The Comforter, the Holy Spirit in the form of cosmic beings, and with the uppermost cross, high-cosmic beings such as Christ. With universal love as an organic faculty, there will no longer be any need for humans to be born of women, they will increasingly gain the ability to materialise themselves. Jesus materialised himself several times for his disciples after he was crucified. He was also in this regard in the image of his Father, as it is said: “For he spake, and it was done; he commanded, and it stood fast.” (Psalms 33:9)

12. The double-poled true human body of the future through which every meeting with another finished human being is experienced as a sexual pleasure and bliss – an experience of “the highest fire” (symbolised by the flames at the very top).

The flames symbolise the highest fire, God’s all-determining will, spirit and power behind all manifestations. As can be seen from the very small size of the flames between the male and the female being, the highest fire in the animal kingdom is reduced to its minimal stage of development (see the next symbol).